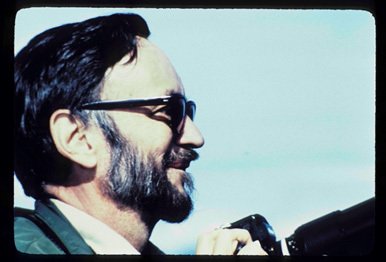 Dale W. Rice (1930-2017) was an exceptional bird and whale researcher as well as an avid book collector and a voracious reader. His book collection includes a broad range of books on marine mammals as well as many rare and antiquarian books.

In 1958, Dale was hired by the US government to develop a biological research program studying the large whales (blue, fin, humpback, sei and sperm whales) that were caught at the US whaling stations in northern California. Starting in 1960, Dale represented the US as a member of the International Whaling Commission’s (IWC) Scientific Committee. Dale was the US representative for the IWC’s North Pacific Working Group, which was tasked with advising the IWC on management of whaling. Scientists from the North Pacific whaling nations, i.e., Canada, Japan, the US and the USSR, collaborated on whale marking studies and shared data freely.

Dale conducted whale marking and sightings cruises from 1962-1969 which ranged from northern California south to the southern tip of Baja California, and in some years out west to the Revillagigedo Archipelago. Dale documented sperm whales, blue whales, fin whales, both sei and Bryde's whales, as well as killer whales.

After the US whaling stations closed in 1972 following passage of the US Marine Mammal Protection Act, Dale continued to do whale research surveys in many oceans and he wrote a series of scholarly works, including a number of chapters in the Encyclopedia of Marine Mammals. Dale was also one of the world's foremost experts on sperm whales.

Dale’s final “magnum opus” is his Special Publication Marine Mammals of the World: Systematics and Distribution, published in 1998. This is the marine mammal “bible” with all the agreed scientific nomenclature. Dale served on the Society for Marine Mammalogy’s Taxonomy Committee until his death in 2017.

Dale was noted for his scholarly and comprehensive approach to the study of birds and mammals, his elegant and precise writing style and his intense attention to detail. He was the rare researcher who was both an expert observer and analyst of animals in the wild (i.e., studies of life history and ecology) as well as animal specimens (i.e., studies and in-depth contributions on marine mammal systematics and nomenclature). Over the course of his long career, Dale authored or co-authored at least 164 publications.

As a legacy for future researchers, he established the Dale W. Rice Memorial Library Trust. We are located in NE Seattle near NOAA Fisheries Alaska Fisheries Science Center and we are open by appointment. If you have questions or suggestions, please contact us.